Estonia's approach to higher education internationalisation continues to reap rewards, and provides insight about the role played by the International Student Barometer.

Estonia’s success on the international Higher Education stage has long been lauded by HE experts as a “text-book” approach to internationalisation:

"The Strategy for the Internationalisation of Estonian Higher Education over the Years 2006-2015 has been considered by experts consulted informally for this report as “a classroom example of how things should be done and was indeed very effective”. While not necessarily adopting a comprehensive approach to tertiary education internationalization, the case of Estonia is a good practice example of setting ambitious performance targets to measure progress with regard to internationalization goals."
- World Bank Group

Brief background
Estonia has around 20 HEIs, 7 of which are research universities, the rest being Universities of Applied Sciences. Generally speaking, Estonia (until 2020 the responsible body was Archimedes Foundation, after the merger in 2020 “Study in Estonia” is managed by the Estonian Education and Youth Authority) has been promoting Estonia as a study destination for 15 years with great success - in the last 10 years alone the numbers of international degree students has increased 500%. Putting this achievement into context, Estonia is a very small country with a population of just 1.3million – one of the smallest countries in the EU with its own language.

Having recognised the country required a comprehensive Higher Education internationalisation strategy, in 2005 the Estonian government devised a plan which subsequently ran from 2006 to 2015. There were less than 1000 international degree students at the time in Estonia, so it was clear they needed more internationalisation, more international students, more overseas professors, and promotion of incoming and outgoing mobility. The number of overseas students studying in Estonia indicate the success of the strategy, but the numbers only tell half the story – the quality of study in Estonia, and levels of student satisfaction show just how the country is achieving quantity and quality when it comes to delivering international education.

Engaging with international student satisfaction benchmarks
Loonurm himself started the international marketing for Study in Estonia in 2008/09, having quickly acknowledged that success would depend on the full cooperation of the institutions and their stakeholders. To position and market Estonia effectively as an HE destination, and focus on their initial target countries of Finland, Russia, Turkey, China, Latvia and Ukraine, they needed to create synergy. But they also needed to take into account the early student journey from very first contact until arrival, which in many countries would be a significant duration, but would also offer Estonian institutions multiple opportunities to implement their strategy.

Early on in that implementation, in 2009, Estonia decided to engage with i-graduate’s International Student Barometer (ISB), the global student satisfaction survey, in order to understand how Estonia and its universities were performing against other destinations around the world. They needed to see the satisfaction rates of their students compared to students globally so they could better understand and utilise their strengths, and directly tackle any perceived areas of weakness. For Loonurm, the decision was a simple one:

“ISB was and still is the only way to really measure and compare international student satisfaction rates in different countries on the global level.”

Loonurm goes on to explain how the results of the global survey were received that first time: “When we got the results it was a pleasant surprise. Comparing Estonia’s results against the global average, they were ahead in three out of the four main ISB categories - Arrival, Living, and Support. In fact, only the category of ‘Studying’ fell below the global average. However, this lower score took into account a number of survey topics that, at the time, were not necessarily considered by Estonia’s universities as part of academic delivery – namely ’Career counselling’, ‘earning money during study’, and ‘employability’.”

So, although Estonia’s results in 2009 under-performed in these sub-topics of Studying, the ISB highlighted the importance of considering these areas more carefully in order to improve student satisfaction. Highlighting this meant that Study in Estonia and Estonian universities could see how by addressing these particular topics, they could start to improve student satisfaction levels across the board, as well as impacting students’ propensity to recommend Estonia as a study destination. This became fundamental to their strategy to be more competitive on the international Higher Education stage. 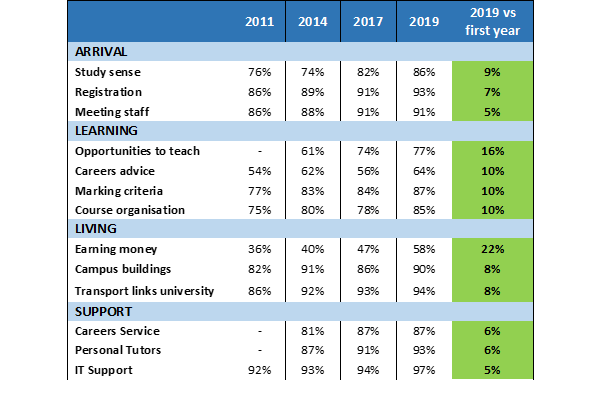 Examples of evidence-based improvement measures
The ongoing success of Estonia as a study destination is a carefully managed national initiative with the main stakeholders all working together to improve the quality of the study experience. Taking just one example of this cooperation, at the start of the programme, international non-EU students graduating from an Estonian University without a job had to leave the country. This of course would negatively impact students’ perceptions of employability. Today however, when a non-EU student graduates, they have a window of 9 months to find employment before their visa expires, a policy change that has impacted ‘employability’ perceptions and subsequently Estonia’s ‘Studying’ scores on the ISB.

Taking a more localised example, Estonian University of Life Sciences (now in the top 50 QS rankings for forestry & agriculture) uncovered via the ISB that their students’ level of satisfaction was being impacted by previously unknown online connectivity and internet issues. The fix was a relatively simple process, but for their students proved significant.

Loonurm explains how the critical feedback obtained via the ISB is just as well received as positive feedback because it helps increase institutions’ awareness of how and where they can continually improve. Of course, the positive feedback is good to validate processes, confirm staff expertise and ensure the institution is doing things well, compared to their international counterparts.

A cycle of continuous improvement
Estonia’s national initiative for HE international marketing, Study in Estonia, continues to fund universities’ participation, having now run the ISB five times - in 2009, 2011, 2014, 2017 and 2019. Those involved the most in the ISB are naturally the Departments for International Cooperation, International Relations, Admissions and Marketing, who embed the ISB process into their planning cycles. However, key stakeholders in most faculties and colleges are also made aware of the ISB performance indicators.

“It’s a really good tool for assessing performance and results, and planning for the future,” comments Loonurm.

Estonia’s results are compared with the European and global benchmarks, but they are always very interested in their main regional competitors such as Finland, Sweden, Germany and other Baltic countries. And that interest goes both ways. So, when the National Agency of their European neighbour, Latvia, heard about Estonia’s positive experience with the ISB, they also decided to participate. This came as no surprise to Eero at all. “For every university and every country, there is something to analyse and improve. For every stakeholder – from the Minister of Education, to Department Heads of Internationalisation or Student Support or Finance, to academic staff – there is so much rich data and useful material to work with.” For Loonurm and Estonian Higher Education, employability was a key area for them to focus on, but for other universities or national agencies it will differ, be this the arrival process for international students, accommodation, or maybe their Net Promoter Score isn’t where they wish it to be and they need to understand why their alumni isn’t recommending the institution enough. The ISB breaks down satisfaction scores across all levels of student types, levels and years of study, so the results are relevant to all the institutions’ stakeholders.

For Loonurm, another area of particular interest was, and still is, how international students got their information about universities in order to inform their decisions on where to apply – which are the most important channels in this decision-making process? Even for the most successful universities, this will be of relevance as they look to further enhance their international recruitment by bolstering their strengths and improving the weaker aspects of their marketing channels targeting prospective students around the globe. Estonia’s report reveals that for 95% of students that go to Estonia, the main reason is future career impact – they want a better future for themselves and recognise that Estonia can provide that.

International Student Barometer 2019 analysis also shows how Estonia outperforms all other countries when it comes to the host country governmental service impacting students’ choice of institution. 16% of students cited the Study in Estonia service as influential in their decision, compared to a global benchmark of 5%, and the next highest performing country scoring 12%.

ISB-informed marketing
Loonurm strongly believes that the i-graduate barometer is fundamental to institutions’ marketing success – “The data is very rich, enabling you to delve deep into students’ perceptions – even if you were starting with nothing in your marketing mix, you could use the barometer to inform your strategies, your marketing slogans, and market to any target country and any sub-group in the world.”

Informing future HE strategy
Loonurm explains how he has very high expectations for the continued development of Estonian Higher Education and for the employability prospects of their international graduates. He naturally expects them to be successful in whichever country they subsequently choose to reside, and also sees them as likely brand ambassadors for Study in Estonia and for Estonian institutions. “We therefore plan to continue our use of the ISB to further improve satisfaction levels for our students across the range of categories. The current planning for 2021-2027 continues, and as soon as the new programming period is clarified, we’ll look to run the ISB again. And of course, the universities are keen to participate.”

The growing numbers studying in Estonia means there are challenges as institutions strive to deliver an increasing quality of education. Institutions’ continued participation in the International Student Barometer means they improve their level of understanding of their students’ levels of satisfaction, perceptions, decision making, expectations and intentions. As the world looks to tackle the impact of the global pandemic, this rich analysis is arguably more important than ever and will undoubtedly prove its worth in the next stage of Estonia’s higher education development.

Ruhr-Universität Bochum, Germany:  Finding your way as an international student in Germany

A student’s arrival experience is one of the first they have of the institution. The arrival is the crucial start of the student and institution...

How German universities, under the guidance of the DAAD, are leveraging ISB report data to attract international students

As with many universities, COVID represented a temporary halt on the University of Limerick’s plans to develop their internationalization strategy...